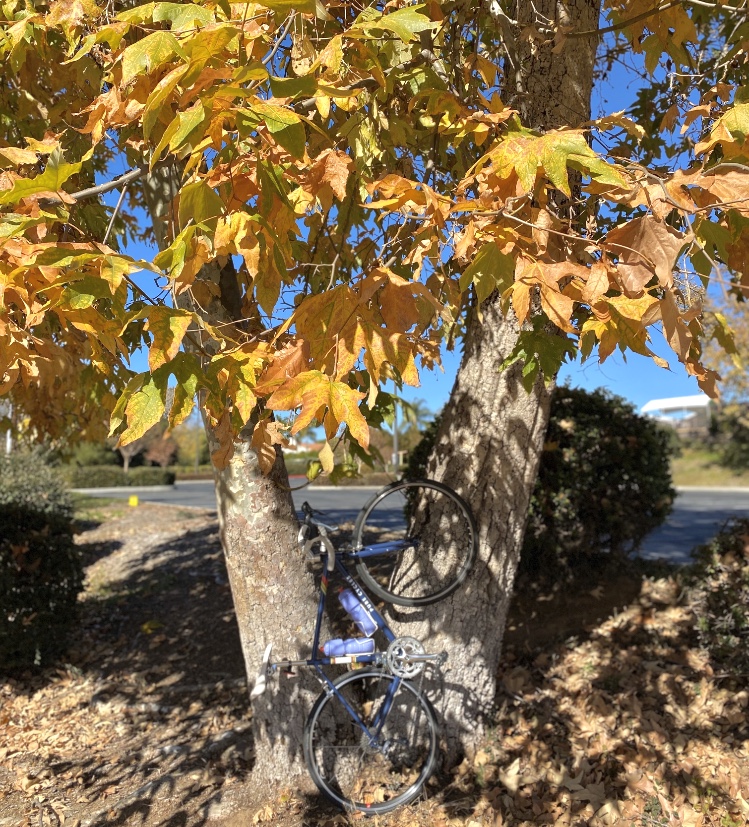 Always On My Mind…

The thoughts begin in my driveway as I’m about to head out each day — that the very act riding this bike increases my odds of dying too soon.

I check my brakes, my tires, and make sure everything on the bike is solid. I pause for a moment and remind myself to be careful. I think of loved ones.

Going out this past Wednesday, I knew I’d be riding directly over the spot where a cyclist was hit and killed by a truck the day prior. It was like paddling into a wave the day after somebody got bit by a shark — something I’ve also done.

As I rode past the scene of Tuesday’s fatal accident, I couldn’t help but think that a man actually died there just 24-hours before. It didn’t help, knowing the man who was killed and I were the same age.

I wondered if he was one of the local cyclists I see regularly. He and I might have exchanged waves or nods as we passed one another going in opposite directions.

I wondered if he saw it coming.

I wondered how severe his pain was during the impact.

I wondered how quickly he died.

I wondered what his life would have been had he survived — what injuries or disabilities he might have have lived with.

I wondered who’s mourning for him.

I wondered how his loved ones and friends will carry on.

I think about the driver of the commercial truck who struck him — I wondered how his life will be impacted, ongoing, as well as his loved ones. The newspaper said he tested positive for “a drug“.

And of course in all of these things, I wondered what if it had been me who was hit.

I wondered how well I would do as a paraplegic, a quadriplegic, or what my life would be like living in a head injury center.

I wondered about spending prolonged time in a coma, being kept alive by tubes snaked up my nose and needles in my arms while family members argued about whether or not to pull the plug.

I wondered if there’s a life beyond this life.

I wondered about how my loved ones and friends would carry on if it had been me.

If I’m being honest, I also wondered if I would’ve just walked away. I kind of have that history.

I thought of cycling friends who’ve been been hit by cars through the years. Some have fared better than others in their recovery. For a few, their injuries and pains will be with them for the rest of their lives.

To ride a bike on a well-traveled road, and to do so regularly, is to confront the prospect of death each time I go out. It can’t be ignored and it’s not anything I take lightly.

To survive each ride intact requires planning, concentration, attention to detail, and that I respect the conditions and the possibilities which surround me. Those possibilities are vast. And this week, for the first time, I seriously considered giving this up.

For an 8-mile stretch on Highway 76, just after I passed the site of Tuesday’s fatal accident, every time a car passed me at a high rate of speed I cringed, ducked my head, and drew my shoulders in. It was maddening. At one point, I thought about stopping, throwing my bike into the scrub, and hitching a ride home. I really thought about doing that.

On the final stretch of the ride though, heading back into Fallbrook, I began to feel like me again — at peace. Not confident, not invincible, but feeling like that’s where I should be and that’s what I should be doing.

In the movie, Riding Giants, there’s a scene with big wave surfer, Grant Washburn. He talks about going into the water for the first time after legendary surfer Mark Foo died on a wave at Mavericks — a surf break near Half Moon Bay. After Washburn caught his first wave in the days following Foo’s death, he said he knew he was home — he was in the right place doing what he needed to do to be himself.

This is what I think about when I ride…Jhciacb

Whether you ride a bike or not, thank you for taking the time to ride along with me today. If you haven’t already, please scroll up and subscribe. If you like what you read, give it a like and a share. If not, just keep scrollin’. Oh, and there’s this Christmas classic from Paul Kelly  Enjoy…

4 thoughts on “Always On My Mind…”