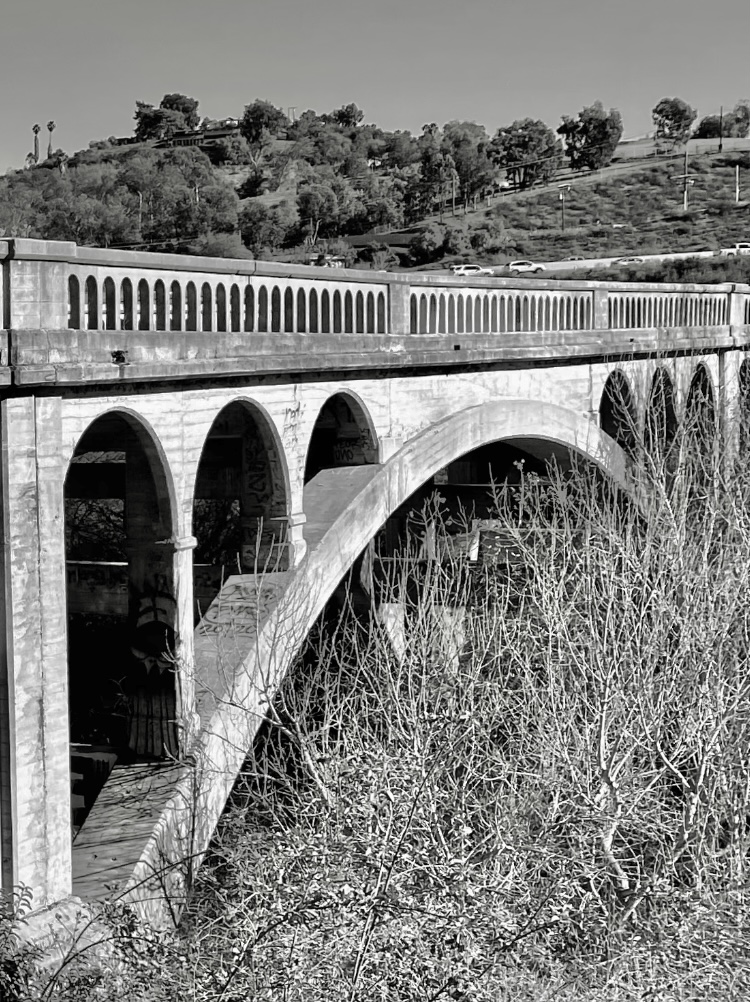 A Bridge Not Too Far…

It happens infrequently enough that it always shocks me. That said, it never really surprises me. I don’t think that’s a contradiction. More on that in a bit.

A regular stopping point during my rides is The Old Bonsall Bridge, just west of the community of Bonsall. The bridge was formerly a section of State Highway 76, and spans roughly 200 yards across the San Luis Rey River, 90 feet below.

The bridge was completed in 1925. It majestically served the state of California for 65 years until it was decommissioned in 1990. In 1992 the bridge was designated as a National Historic Site. In addition to its historic status, it’s also the designated bike lane for westbound Highway 76, diverting cyclists off the new Bonsall bridge, roughly a 2,000 yards to the east.

I cross the old bridge twice on most rides — once on my way out, and again on my way home. On my return crossing, I usually stop at the midpoint of the bridge for some water and a small snack. I allow myself a few minutes to take it all in — to stand in splendid isolation on this antique structure, surrounded by native plants, trees, and occasionally some local critters and birds. For a moment in time, I’m separated from the rest of my species.

The bridge is a little bit ancient Rome, a little bit midcentury Americana, and a whole lot of aesthetic wonder. In the five years I’ve been riding across it, I’ve stopped midpoint nearly 1,500 times. The only time I don’t stop is when I look up and see them…

Them is the photographers, their assistants, and the woman or women in bikinis or perhaps a little bit less, being photographed on the bridge.

There’s often a sports car or motorcycle involved, but sometimes other props are used — swords, guns, and even animal skin rugs. I recently witnessed a bikini-clad woman posing with a fishing pole. Some of these photo shoots are for commercial purposes, while I’m certain others are just for fun.

No judgment from me — not at all.

I just feel a little uncomfortable stopping on the bridge when one of these photo shoots is taking place. I don’t want to be seen as a creeper. A few weeks back though, an epic sunset was taking shape that I didn’t want to miss.

At the the midpoint of the bridge was a black BMW, a photographer, his assistant, and a girl covered with tattoos wearing a bikini. As she Tawny Kitaen’d herself about the hood of the Beamer, one man adjusted a light reflector and the other took photographs. I stopped about 30 yards short of their shoot.

That evening I took a few pretty pictures, got back on my bike, and got out of there without once turning my head toward the photographer and his model. I purposefully looked down as I rode past them.

I’ve witnessed a dozen or more of these shoots in the last five years. The women I’ve seen are usually on the younger side, some I’m guessing, a little too young. And as I exit the bridge onto Old River Road, I always remember two things…

2. Girls may be cute, but old bridges are beautiful.

It’s a bit of a novelty to see these photo shoots, but I prefer having the bridge to myself. Probably not what 15-year-old Roy would have thought.

Whether you ride a bike or not, thank you for taking the time to ride along with me today. If you haven’t already, please scroll up and subscribe. If you like what you read, give it a like and a share. If not, just keep scrollin’. Oh, and there’s this from The Sugarcubes. Enjoy…!

9 thoughts on “A Bridge Not Too Far…”