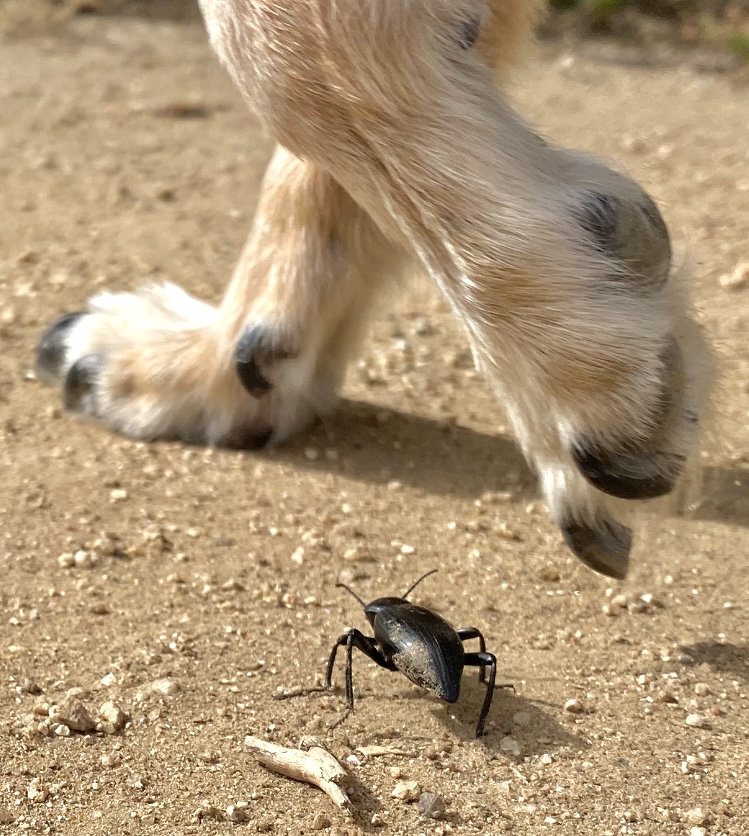 For over a decade, my sidekick and I walked side-by-side at the Los Juilgeros Preserve — a 25-acre nature preserve just a mile from downtown Fallbrook. It’s a place where he enjoyed hunting for sniffs. Walking off leash from an early age, he had the freedom to roam and follow his nose, but never went too far from dad — and I never took my eyes off of him.

A few years back, around the time he turned 16, what we referred to as the Big Preserve was a little too big, and we took our walks to what we called the Little Preserve — a smaller but similar landscape, and our walks were reduced to less than a mile. And that’s where we’ve been walking for the last few years.

We don’t walk the Little Preserve anymore either. His steps are slower, his bones getting frail, and he tires easy. These days, we drive to the local school district office, which has a small park in front that’s dog friendly. I put him down, let him hunt for some sniffs, do his thing, and often he’ll lay in the sun for 5 or 10-minutes before we head home.

He still gets excited when I head to the front door, and ultimately I think that’s what it’s about — to leave the house, get in the car, and just go somewhere. When I think about it, it’s not too different than when I would take my mom to the airpark each day for lunch — just a reason to get out and see that the world is still there.

Missing the days of our longer walks, and missing the natural surroundings they took place in, I’ve been taking Stroodle once again to the Little Preserve. He doesn’t walk the trail anymore. I carry him like a little football tucked into my right arm. I carry him a few hundred yards, put him down, let him get a few sniffs, and if he’s so inclined, lay in the sun. Then I scoop him up, walk a few hundred more yards, and repeat the process until we’ve completed the 3/4 mile trail.

He’s almost 19 years old. I know this can’t go on. Each day when I wake up the first words out of my mouth are “thank you for another day“. I then ask him for one more year, but I know that’s not realistic.

It’s funny though — as old and slow as he can be when I take him for our walks, when I put on my overshirt, grab the car key, and open the front door, he jumps from the sofa like a puppy, spins a couple times, and beams with excitement. He’s my little old man and my kid, simultaneously.

Whether you ride a bike or not, thank you for taking the time to ride along this week. If you haven’t already, please scroll up and subscribe. If you like what you read, give it a like 👍🏻 and a share. Oh, and there’s this from John Cruz (exquisite Zimmy cover)

2 thoughts on “My Little Football Friend…”